(Daily Mail) – President Donald Trump announced Saturday his war on MS-13 declaring that the only way to take down the gang is to change the country’s ‘sad, weak and pathetic’ immigration laws.

In a nearly three minute video posted to Twitter, Trump outlined his plan on combating the gang, which has thousands of members in at least 40 states and is responsible for dozens of gruesome deaths in the country.

MS-13, also known as Mara Salvatrucha, was started by Central American immigrants, mainly from El Salvador, in Los Angeles in the 1980s. The gang expanded to include Mexicans, Hondurans and other Central and South Americans.

According to the FBI, their motto is ‘kill, rape, control, and its members engage in a wide range of criminal activity including murder, rape, prostitution, robbery, home invasions and kidnapping.

According to the commander in chief, part of his plan includes changing how immigrants enter the country. 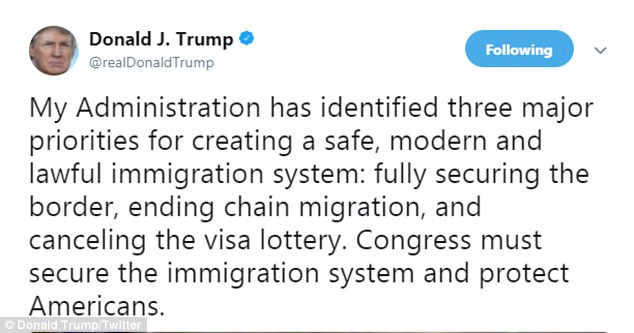 ‘My Administration has identified three major priorities for creating a safe, modern and lawful immigration system: fully securing the border, ending chain migration, and canceling the visa lottery,’ he said.

Trump said ‘loopholes’ in the immigration system has allowed for ‘criminals and gang members to break into’ the country because the laws are ‘so weak, so sad and so pathetic’.

He said MS-13 and ‘many other gangs’ take advantage of those loopholes to not only enter the United States but find new recruits.

‘The laws are bad and they have to be changed,’ he said.

One way Trump plans to rectify the situation is by ending chain migration.

Under current law, immigrants already residing in the United States can petition for visas for their spouses and minor children.

Once the petitioner becomes a citizen they can ask for additional family members, like parents and adult children, to come over.

Trump said chain migration is a ‘disaster and very unfair’ for the country.

He also reiterated his plan to stop the visa lottery, which Trump said should have never been allowed in the first place.

‘People enter into a lottery to come into our country. What kind of a system is that? It is time for Congress to act and to protect Americans,’ he said. ‘Every member of Congress should chose the side of law enforcement and the side of the American people. That’s the way it has to be.’

MS-13 was designated as a ‘priority’ last year by the Department of Justice’s Organized Crime Drug Enforcement Task Force. Attorney General Jeff Sessions said prosecutors are able to pursue any legal avenue to target the gang.

11-year-old boy kills himself while on virtual learning call