President Donald Trump fumed about a caravan of Central American migrants heading toward the US-Mexico border.
By Tuesday, he’d kicked things up a notch, making a surprise announcement at a luncheon: He planned to send the military to guard the border.
The next day, Trump signed a memo warning of a “crisis” at the border and calling for National Guard troops to help solve it.
Officials are still detailing how many troops will be deployed, exactly where they’ll go, what their mission will be and how much it will cost. But White House spokeswoman Sarah Sanders said Friday that plans are in the works.
“We hope to have National Guard on the ground as soon as possible,” she said.
Here’s a quick look at how we got here and what could happen next:

Why is this happening now?

Trump often focuses on the border, dating back to his campaign promise to build a “big, beautiful wall.” But this week, reports about a large group of migrants heading north triggered a fresh tweetstorm from the President.
The migrants are part of a so-called caravan, trekking across Mexico as part of an annual effort to raise awareness about migrants’ plights while also helping some make the dangerous journey. Many of them say they’re fleeing violence and poverty and seeking asylum.
Reports on “Fox & Friends” about the caravan Sunday morning described the group as a “small army of migrants marching toward the United States.”
Trump’s first tweet about the caravan came soon afterward.

Border Patrol Agents are not allowed to properly do their job at the Border because of ridiculous liberal (Democrat) laws like Catch & Release. Getting more dangerous. “Caravans” coming. Republicans must go to Nuclear Option to pass tough laws NOW. NO MORE DACA DEAL!

Twitter Ads info and privacy
And he came back to the topic over and over all week as he announced efforts to ramp up border security.

Why does the Trump administration say there’s a crisis?

In his Wednesday memo, Trump decries a “drastic surge of illegal activity” at the border, including illicit drugs and illegal crossings.
Later, his head of Homeland Security pointed to what she said was a notable spike in activity, asshe announced more details about the administration’s plans to step up security.

After historic lows in illegal traffic last year, the numbers are spiking. March numbers up 37% from Feb (largest one month change in at least 8 years) and TRIPLE over March 2017. We must secure our border. As @POTUS has said: All options are on the table. https://www.cbp.gov/newsroom/stats/sw-border-migration …

Twitter Ads info and privacy
The number of people either caught trying to cross the southern border or rejected for admission increased 37% from February to March, Secretary Kirstjen Nielsen said. The sudden rise was driven largely by a jump in the number of people apprehended trying to cross illegally.
A deeper look at the numbers, though, shows they actually track with historic patterns in recent years.
Critics accuse the administration of using the caravan to rile up immigration hardliners in Trump’s base and say his decision to deploy troops isn’t supported by the situation on the ground. Supporters note that sending troops to the border is nothing new; Presidents George W. Bush and Barack Obama did it, too.

What’s actually happening at the border?

As far as National Guard troops go, not much yet. Same for the caravan; it’s still hundreds of miles away.
But governors in Texas, Arizona and New Mexico have all said they’re working with the administration on the troop request. Trump said Thursday he was considering sending “anywhere from 2,000 to 4,000” National Guard troops to bolster border security.
Arizona Gov. Doug Ducey tweeted Friday that his office was working on plans to deploy about 150 troops to the border next week. And Texas officials said Friday that 250 National Guard troops would be mobilized to the border within the next 72 hours.
Local officials and residents of the border region told CNN they have mixed feelings about the news.
“I think that the Border Patrol are well-trained, well-equipped,” said Sheriff Tom Schmerber of Maverick County, Texas. “I don’t think we need the military here at the border.”
A Border Patrol union spokesman said agents would welcome the extra help.
Once troops make it to the border, there are restrictions on what they can do. Laws dating back to after the Civil War prevent federal troops from being involved in law enforcement. Instead, it’s more likely they’ll be taking on support tasks and freeing up more Border Patrol agents to make immigration arrests.
One Border Patrol official said the agency would like troops to take on jobs such as flying aerial missions, monitoring surveillance feeds, maintaining vehicles and building access roads.

State leaders in California have made no secret of their opposition to many of the Trump administration’s moves on immigration. And, so far, officials there have been tight-lipped about whether they’ll deploy National Guard troops.
Gov. Jerry Brown hasn’t made any public comment, though his office confirmed he participated in a call Thursday with other border state governors and Nielsen.
A spokesman for the California Army National Guard said Wednesday the administration’s request would be promptly reviewed.
“We look forward to more detail, including funding, duration and end state,” Lt. Col. Tom Keegan said.

Is the caravan still coming?

Yes, but it’s dispersed into smaller groups. Originally, more than 1,100 people set out on the journey across Mexico. Organizers say they still expect some 200 people to continue on to the United States and ask for asylum. 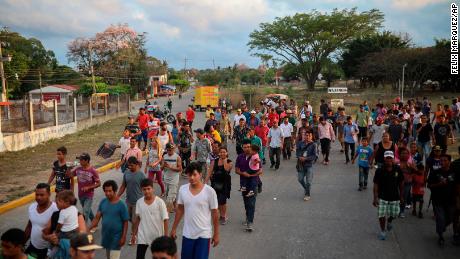 Speaking with CNN from the Mexican city of Puebla, many stressed they were fleeing violence in their home countries and hoping to help their families survive.
“We are not bringing any guns,” said 32-year-old Karen Gallo, who was traveling with her husband and two children.
“There are no jobs, no justice, no laws in Honduras,” she said.
cnn.com/2018/04/06/politics/trump-border-from-tweets-to-troops/index.html

WATCH: McConnell says he will ‘absolutely’ support Trump if he is the 2024 Republican nominee

WATCH: AP reporter calls out Biden spokesman: ‘you guys are taking credit for stuff that the previous administration did’