(Infowars) – President Obama is covered in sperm in his portrait by Kahinde Wiley, who is known to add semen in his paintings: 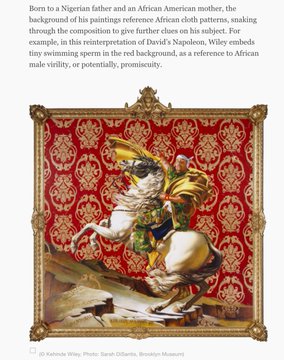 Because agenda driven African American art is more valued than conventional art for some reason, we now have a presidential portrait with sperm painted in on it.

The media previously reported that semen is a common motif in Wiley’s artwork, and sure enough it was added to the portrait of Obama, right on his forehead.

Is this symbolic of how world leaders treated Obama during his presidency? Likely yes, given the Iranian nuclear deal and other lopsided treaties designed to screw America over in the long-run.

Because agenda driven African American art is more valued than conventional art for some reason, we now have a presidential portrait with sperm painted in on it. pic.twitter.com/PQtIi2j0Oz

That’s not the only example of Kehinde Wiley putting sperm in his paintings…. pic.twitter.com/cpiggGVPMt

“The background [of Wiley’s painting Napoleon Leading the Army] is also infused with tiny paintings of sperm – Wiley’s way of poking fun at the highly charged masculinity and propagation of gendered identity that are involved in the Western tradition of portraiture,” art critic Dr. Gayle Clemans pointed out.

Wiley was also accused of adding an “extra member” to Obama: a sixth finger on the president’s left hand.

And, as I reported on Monday, Wiley portrayed the beheading of a white girl by a black woman in a 2012 painting.

According to art critic thejonellaqueen:

This art piece “Judith Beheading Holofernes,” 2012, Kehinde Wiley, places Women of Color, specifically a Black woman in a position of power (and majesty). This is so important because of the racism and sexism that Women of Color have historically and continue to face today. (Not to mention other WOC who face marginalization because of other facets of their identity; SES, Queerness, Ability, trauma(s) in addition to this- the list goes on).

Joe Biden: Return Of The CFR