The Republican governors of Texas, Arizona, and New Mexico — three states that border Mexico — backed the president’s move, which officials said could lead to troops on the ground as early as Wednesday night.

Arizona welcomes the deployment of National Guard to the border. Washington has ignored this issue for too long and help is needed. For Arizona, it’s all about public safety. 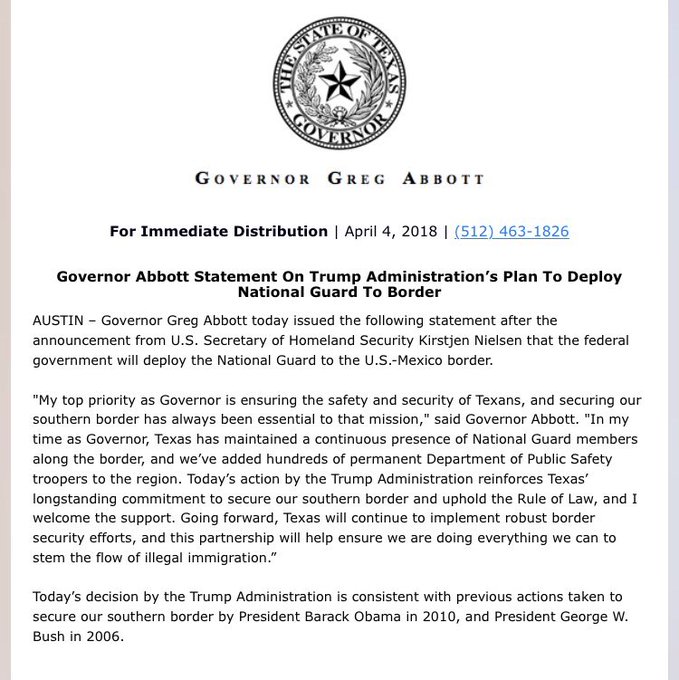 Statement on @POTUS plan to deploy National Guard to border. Texas will continue to implement robust border security efforts to ensure the safety & security of our citizens.

In New Mexico, Gov. Susana Martinez said she appreciates the White House efforts to involve states in the policy-making.

“As Commander of Oregon’s Guard, I’m deeply troubled by Trump’s plan to militarize our border.”

Even California Democratic Gov. Jerry Brown, who has openly sparred with the White House over his state’s pro-illegal immigration policies, signaled that his administration might cooperate.

“This request – as with others we’ve received from the Department of Homeland Security, including those for additional staffing in 2006 and 2010 – will be promptly reviewed to determine how best we can assist our federal partners,” California National Guard spokesman Lt. Col. Tom Keegan said in a statement issued on behalf of Brown’s office. “We look forward to more detail, including funding, duration and end state.”

The Trump administration has not released many specifics of its plan, but a lawmaker told the AP that Congress expects approximately 300 to 1,200 troops to be deployed at a cost of at least $60 million.

States farther from the border mostly avoided immediately responding to the issue. North Carolina Democratic Gov. Roy Cooper’s office did not respond to a request for commentfrom the News & Observer in Raleigh.

Oregon’s governor, also a Democrat, was more direct, promising to defy any request from the White House to send its troops.

If @realDonaldTrump asks me to deploy Oregon Guard troops to the Mexico border, I’ll say no. As Commander of Oregon’s Guard, I’m deeply troubled by Trump’s plan to militarize our border.

There’s been no outreach by the President or federal officials, and I have no intention of allowing Oregon’s guard troops to be used to distract from his troubles in Washington.

STEVE KURTZ: CAN TRUMP LEGALLY SEND TROOPS TO THE BORDER?

“If @realDonaldTrump asks me to deploy Oregon Guard troops to the Mexico border, I’ll say no,” Gov. Kate Brown tweeted. “As Commander of Oregon’s Guard, I’m deeply troubled by Trump’s plan to militarize our border.”

The Trump administration has not requested any troops from Oregon, Brown noted. Under federal law, the president can override a state governor and effectively conscript National Guard troops into federal service.

But the White House, which has said the nation is at a “point of crisis” due to illegal immigration, has not sent any signals it will take that step, nor are there indications it will need Oregon’s help.

While U.S. military forces are barred by law from carrying out domestic law enforcement actions, including some border security duties, they are generally permitted to assist federal agents in various ways.

The Mexican foreign ministry said late Wednesday that U.S. Homeland Security Secretary Kirstjen Nielsen promised that the troops “will not carry arms or carry out migration or customs control activities.”