(Fox News) Dashcam video was released Wednesday night showing the dramatic and deadly crash of a self-driving Uber SUV in Arizona — as the woman operating the vehicle had her head down.

Officials did not release the moment the pedestrian, identified as 49-year-old Elaine Herzberg, was hit “due to the graphic nature of the impact.”

Elaine Herzberg, right, was fatally struck by a self-driving Uber which Rafaela Vasquez, left, was riding in, police said.  (Facebook)

The interior video showed the car’s driver, Rafaela Vasquez, 44, buckled in behind the wheel of the vehicle — which police said was moving around 40 miles per hour in the Phoenix suburb at 10 p.m. on Sunday.

While the Volvo XC90 SUV was in self-driving mode, Vasquez was in the car as a safety driver, who, in the event there was a malfunction or issue, could take control of the vehicle.

In the moments before the car struck Herzberg, Vasquez was seen repeatedly looking down, seemingly toward the console area of the car, until she suddenly looked shocked at the pedestrian in front of her. 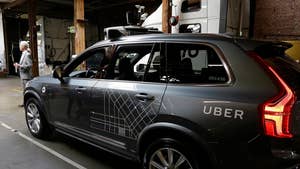 Exterior video showed the Uber car driving at night when the vehicle’s headlights suddenly illuminated Herzberg, who was walking her bike in the street, outside of any crosswalks.

Paramedics rushed Herzberg to a local hospital, where she died from her injuries.

Police have said neither Herzberg nor Vasquez showed signs of impairment in the crash, and Vasquez has been cooperating in their investigation.

Uber has said it was fully cooperating with local authorities as the investigation unfolds, and has halted testing of the self-driving vehicles in cities across the country.

WOW: Here’s How Much Biden Will Crush Your Income